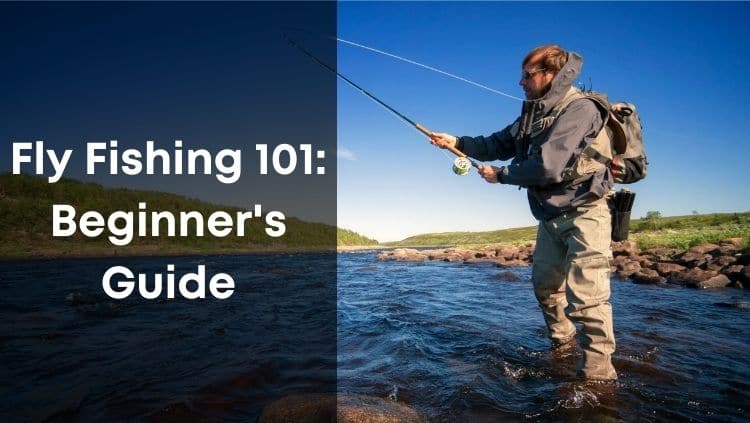 Has the thought of fly fishing recently piqued your curiosity, but you currently have no idea where to start?

If so, you are certainly not alone. To the casual observer, fly fishing looks much more complicated than it is. Fly fishing is gratifying and far easier to learn than one might think.

The bottom line? Anyone can learn to fly fish with the help of a bit of guidance. This exact notion is why I decided to write the following guide.

If you are ready to dive headlong into the tranquil yet exciting world of fly fishing, then read on to learn everything that you need to know before wetting your first fly.

What is Fly Fishing?

Fly fishing is a method of angling used to draw strikes from fish that instinctively feed on varying types of insects and other prey of minute proportions. Fly fishing provides anglers with the most practical approach toward replicating prey of this nature, as traditional fishing gear is generally ill-suited to presenting ultra-lightweight lures.

The History oF Fly Fishing

The history of fly fishing dates back centuries, having evolved from primitive angling tactics of several individual cultures. However, the practice of fly fishing is generally thought to have first originated in England around the 4th century.

Additional reports suggest that similar practices were employed in Rome around the same period. An early Japanese fly fishing technique, known as Tenkara, was also well documented and said to have existed 400-500 years ago. As we know it today, fly fishing stems from an overlap of multiple regional fly fishing tactics, which eventually gave way to modern practices.

Today, fly fishing is characterized as the use of specialty tackle to cast miniaturized lures in a bid to catch fish that feed heavily just below the water’s surface. In this angling method, a weighted line is used to facilitate casting, as traditional flies are too lightweight to be cast with standard fishing equipment.

What is the Point of Fly Fishing?

The practice of fly fishing seeks to capitalize on the natural predatory instinct of game fish. As a matter of survival, fish must seize upon a meal when provided. While most species of fish feed on a wide variety of food sources from day to day, virtually all feed heavily upon insects and other small invertebrates at different times throughout the year.

What Value does Fly Fishing Offer?

Insect larva, nymphs, and flies provide an easy to obtain a meal for fish throughout the year, with many species, such as trout, relying upon this form of food as a staple of their diet. Fish typically wait just below the water’s surface, especially in flowing bodies of water, waiting to feed as such prey floats by.

While it is not impossible to catch fish, such as trout, with the use of standard tackle, one is quite limited in their ability to present small, insect-like lures. On the other hand, the use of fly fishing gear allows an angler to accurately replicate the exact scenario needed to draw strikes when the use of standard equipment proves to be ineffective.

In many ways, fly fishing does provide an angler with the means to catch more fish than when fishing with conventional equipment. However, as most anglers are well aware, fish do not always feed on the same types of prey from day today.

While fish might largely ignore the topwater insect bite and key in on schooling baitfish on one given day, they are just as likely to miss other food sources in a bid to feed on insects the next. When these two situations present themselves, there is nothing as effective as fly fishing. However, those who do not fly fish often find themselves in a much more difficult spot on days like these.

In essence, fly fishing allows an angler to more aggressively target fish holding tight to a particular feeding pattern or species of fish that favor an insect-rich diet, such as trout. Unfortunately, either of these situations tends to prove troublesome for anglers who fish solely with traditional tackle.

Is Fly Fishing Hard to Learn?

In most cases, fly fishing is no more challenging to learn than any other type of fishing. There is undoubtedly a learning curve involved when first getting started, but one can typically get the hang of their equipment and begin catching fish after only a few days on the water. As with anything in life, practice makes perfect.

What is the Difference Between Fly Fishing and Regular Fishing?

The main difference between fly fishing and regular fishing relates to the exact selection of tackle used. Fly fishing is typically conducted with a lengthy, specialty fly rod and a purpose-specific fly reel. This reel is fitted with a weighted fly line, which allows an angler to cast insect-sized flies that are mainly absent enough weight to cast with conventional equipment.

Conversely, “regular” fishing is generally conducted with a standard rod, a baitcasting or spinning reel, and mono, fluorocarbon, or braided line. When fishing in this manner, an angler either casts out a baited hook and waits or casts out a lure that is then retrieved to mimic a swimming action.

Fly fishing also primarily takes place on moving bodies of water, such as cool running creeks and streams, while regular fishing is generally associated with lakes and ponds. However, you can use each of these two fishing methods interchangeably and universally across virtually any body of water.

Pro Tip: Fly fishing in moving water allows an angler’s fly to cover more ground, thereby presenting additional fish with each cast. This can bolster success rates and ultimately make for a better day of fishing.

Before your fly fishing adventure, here are the essential gears that you need to grab:

Along with its reel, a fly rod is the backbone of any fly fishing rig. Fly fishing rods differ from standard rods used when fishing conventionally. These rods vary in length. However, 9-foot is the standard and most commonly used fly rod length. Rods of this nature also come in various weights. The weight selection of a fly rod must match that of an angler’s reel, as well as their line.

Like fly rods, fly reels come in many different sizes and configurations. Choosing the correct fly reel is of immense importance, as it directly transfers an angler’s input of manual force into a robust degree of fish fighting power. A fly reel must also be matched to the weight of the particular rod that is to be used and the weight of the line that one will be fishing with.

Fly lines are typically 90-foot in length and come in a significant range of weights. These weights are generally graded numerically, with 1 being the minor diameter and 12 being the largest. Each line features three sections; the head, taper, and running line.

The head is the heaviest part of a fly line, to which an angler’s flies are tied. The taper is the segment that connects the head and running line.  The running line is simply that which is spooled out when casting or when fighting a fish.

Additionally, a monofilament or fluorocarbon line backing is used on virtually all fly fishing reels. This backing provides extended line length, should an extensive fight unfold while protecting your fly line while on the reel.

A fluorocarbon or monofilament leader is used to attach the end of an angler’s fly line to their tippet. This tippet then ties off to a fly at its opposite end. Leaders can be purchased in many sizes and lengths, providing a viable option for virtually any circumstance imaginable.

The spool can purchase a Tippet and is available in an array of strengths. These strength ratings range from 0X-8X, with 0X being the strongest available. Like leaders, tippet is offered in both monofilament and fluorocarbon forms.

Today, you can purchase flies in various sizes, shapes, and configurations. The most common flies are dry flies, nymphs, and streamers. Dry flies look like actual insects and are designed to float atop the water. Nymphes is miniature, look like tiny invertebrate, and flow through the water column. Streamers give off the appearance of native baitfish, such as minnows.

While one will not always find themselves wading a body of water, the layout of many creeks and streams makes such actions necessary. As a result, Waders are available in virtually every size and offered in insulated and non-insulated forms. This provides an angler with multiple options to select from in a bid to find a set of waders that perfectly suits their needs.

Pro Tip: When purchasing your first fly rod and reel, it can be helpful to locate a quality rod/reel combo. Doing so eliminates any misgivings toward matching rod/reel/line weights, thereby saving you time and hassle.

How do You Cast a Fly Rod?

Pro Tip: It is crucial to pause during the forward swing of your cast. Without doing so, maximum casting distance will never be achieved.

With all essential gear procured, and a basic understanding of how to cast, one can begin venturing out in search of fly fishing success. However, this, too, requires a sound game plan. An angler must select where and how they intend to fish, preparing for all which they expect to encounter along the way.

Choosing a Body of Water

Before striking out for an angling excursion, one must know a suitable location to fish. Ideally, it is best to locate a slow but steady-moving creek or stream that is known to provide ample opportunity. It is also of value to consider the depth of such a creek or stream. It can be dangerous to traverse a creek while wading when its depth is unknown.

Have a friendly chat with other fly fishers in your area when in doubt. While these individuals might not furnish you with the exact location of their honey hole, most fellow fly fishers will be more than willing to point you in the right direction.

The next consideration that one must make is whether they intend to fish from a boat or the bank. This is a determination that typically hinges on the type of water that you will be fishing. When fishing lakes or even rivers, fishing from a boat is an angler’s best option, especially accessibility. However, shallow streams and creeks are typically waded as a matter of convenience.

Pro Tip: When fishing a new body of water, observe how fish appear to be feeding. If fish repeatedly strike at the water’s surface, the use of a dry fly is likely to pay dividends. However, if few topwater strikes are apparent, fish are likely feeding below the water’s surface. In this case, using a nymph or streamer should be your go-to.