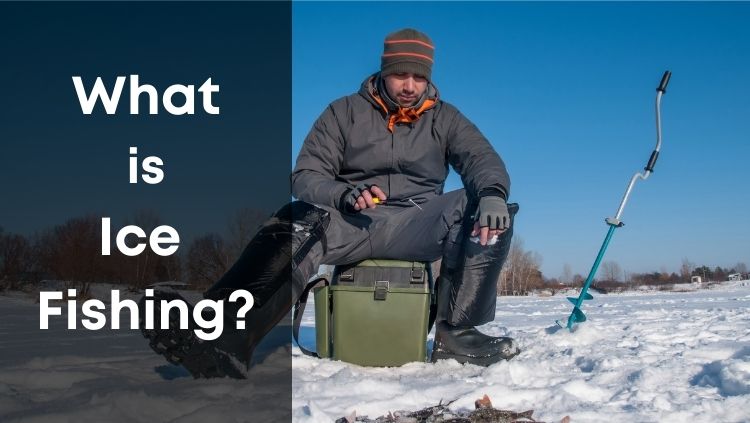 With the onset of winter comes the freezing of lakes within many northern climates. For many anglers, this signals an end to annual lake-bound outings. However, for others, the prime fishing action is only beginning.

Every year, an untold number of anglers from across the world find significant value in the yearly freeze as they take to the frozen waters in search of a wholesome ice fishing adventure. Ice fishing is unique in many ways and presents a wealth of opportunity for those who wish to catch fish in abundance during the winter months.

However, ice fishing can also present a learning curve for those who have never fished in such a manner, which you must overcome to find consistent success. The following information will assist you in circumventing much of this learning curve, thereby allowing you to make the most out of your time on the ice.

What is Ice Fishing?

Ice fishing is defined as using lines and hooks to catch fish through a hole in the ice of a frozen body of water. The sport of ice fishing is popular in virtually any area where water regularly freezes to an appropriate thickness to allow safe excursion onto the ice. In North America, ice fishing is practiced with regularity in the northern ⅓ of the United States and nearly every portion of Canada.

The History of Ice Fishing

Ice fishing’s history is rooted in the necessity to sustain survival. It is believed that ice fishing’s history dates back more than 2000 years, when native people across the world began experimenting with the idea of retrieving fish from beneath the ice as a means of providing sustenance.

These primitive anglers knew that there were fish to be caught beneath the ice, though they needed to figure out a method of extracting such fish from below. The earliest forms of ice fishing involved cutting holes in the frozen lake bed and using spears to harpoon fish as they swam down.

With the advent of the fishing line in its earliest form, ice fishing as we know it today grew to prominence. As the years have passed, the methods related to ice fishing have grown ever more advanced. Today, the vast majority of anglers ice fish using application-specific rods and reels, with many basing their efforts from inside the confines of purpose-built ice shelters.

While one can certainly fish in an open setting anywhere along a frozen lake’s surface, many anglers choose to utilize a shelter of one type or another. These shelters are typically known as ice shanties. These small portable shelters are commonly constructed of wood or plastic and are portable by nature.

Most anglers transport their ice shanties onto the water by vehicle or snowmobile, though such shelters can also be transported by hand when necessitated. These portable enclosures feature average measurements of 6’ X 6’ and are tall enough for an adult angler to stand upright within.

Many manufacturers have begun offering lightweight, pop-up canvas-style ice fishing shelters in recent years. These shelters can be set up in a matter of minutes and provide an unparalleled level of portability. This is ideal for ice fishing during the late season when warming temperatures can force frequent relocation.

It is pretty common for bait and tackle shops to rent small shelters to ice fishers on many larger lakes. These shelters can be rented for the day or for lengthier periods, where they are left stationary until removal just before the spring thaw. Many ice shelters can be found grouped in one location in some areas, known as shantytowns.

The use of an ice fishing shelter assists an angler in staying warm by retaining heat and reducing wind chill. Many anglers also choose to employ a portable heater within their ice shelter, as this additional heat source allows one to fish in relative comfort.

Pro Tip: Before heading out on the ice with your portable enclosure, study the trek ahead. It is imperative to sort out every detail associated with the ice fishing shelter set up in advance. Ensure that you have planned out all details related to transport, have double-checked ice thickness, and have secured ice anchors to secure your shelter if necessary.

To find success when ice fishing, one must first procure all necessary equipment to begin their adventure. The following list outlines several items that an angler needs to have at their disposal before striking out across the frozen lakebed.

If you hope to try your hand at ice fishing, you must first have a way to pierce through the ice to reach the water below. This is done with an ice auger. Ice augers come in manual and motorized forms, with the former being the most cost-effective and the latter being more practical.

While an ice shelter does not technically qualify as an ice fishing necessity, such structures are popular enough to warrant a place on our “essentials” list. An ice shelter can be positioned as desired, allowing an angler to fish in relative comfort without being exposed to harsh winds and wintry precipitation.

An ice sled is essential when hauling the rest of your gear from your vehicle to your destination on the water and back again. An angler’s gear is placed on or within an ice sled, pulled along whenever and wherever necessary.

Although you can use any type of rod for ice fishing, those made specifically for the sport are of extra value. Ice fishing-specific rods are much shorter than standard rods, seldom exceeding 2-feet in length. This allows an angler’s rod to be positioned much closer to the fishing hole for additional sensitivity.

Most ice fishing reels are of a spinning variety and ultralight in design. This is a perfect match for the miniaturized rods employed when ice fishing. These reels provide excellent control for jigging and highly efficient drag systems for diverse fighting potential. Ice fishing reels can be purchased at nearly any price point, from $15-$150.

There are also numerous additional items that ice anglers should always have at their disposal. The first and foremost of these items is a fishing license. It is also a good idea to keep a compass at the ready should the sunset and difficulty occur when attempting to leave the ice. A chair and additional layers of clothing should also bear consideration, as should the type of bait to be used.

Pro Tip: Though not essential in any way, a vast number of serious ice fishers use primitive fish finding units, known as flashers. These early sonar units allow an angler to take stock of fish within the area of their hole in the ice and give away a fish’s position as they approach an angler’s bait.

Even with an understanding of what ice fishing entails, and a stock of essential gear at the ready, an angler must be capable of locating fish and drawing strikes if success is to be expected.

The following will outline how to do just that, allowing you to capitalize on this winter’s freeze and join the growing ranks of ice fishers worldwide.

To find ice fishing success, you must first know where to base your efforts. Deciding where to place your hole in the ice and drop your line is as simple as understanding how fish relate to the body of water in which they are found.

During the winter months, fish typically hold to greater depths, where water temperatures tend to be the warmest on any given body of water. However, these same fish will also patrol slightly shallower water while hunting for baitfish or other food sources.

For this reason, the majority of anglers target steep shorelines, which drop off to deeper depths. These transition zones afford fish everything they need during the winter months. In addition, fishing in these areas where fish tend to congregate in numbers provides an angler with the best possible chance at success.

You will need to prepare an appropriately sized hole in the ice with the perfect spot selected. In most instances, a hole 10”-12” is ideal, though some government agencies restrict the sizing of such man-made holes to a set maximum size. With your hole drilled, you can use a skimmer to remove any remaining ice that lies within.

What to Fish for?

In most areas, panfish are the most commonly pursued species of fish when ice fishing, with perch being especially favored. While most panfish are small, they are also plentiful, providing an abundance of opportunities for those hoping to experience a memorable day on the water. Additionally, panfish make excellent table fare and are often sought out for their wonderful flavor.

Pro Tip: When ice fishing for larger species of fish, it is imperative to remain mindful of your reel’s drag setting. Fish of substantial size can quickly push an ultralight reel to its max and break the light line with little difficulty. Therefore one must be ready to make all necessary drag adjustments at a moment’s notice.

How to Catch Fish?

Jigging is considered to be the most effective presentation when ice fishing. In actuality, it is one of the only viable presentation methods when one considers the small window through which an angler can drop their line.

Jigging is the act of slightly raising and lowering one’s rod tip every few seconds, which presents a lure with a struggling appearance, to which game fish typically respond in a predatory manner. Before jigging, an angler will drop their bait to a predetermined depth, at which they expect fish to be found. Jigging will then commence and continue until a strike occurs.

Pro Tip: When legal to do so, chumming the water through your hole in the ice can be an effective way of drawing fish and enticing bites. Chumming disperses scent throughout the water, attracting fish looking for an easy meal. Cat food, sardines, and barley mixtures are all cited as being particularly potent in this regard.

Due to its nature, ice fishing carries inherent dangers. Anytime a frozen expanse of water is traversed, extreme caution is imperative. As a rule, ice fishing should never be conducted on ice thinner than 4”. ice of a lesser thickness is prone to breakage, leading to a perilous situation. If an angler were to fall into frigid, wintery water, the shock could set in almost immediately, lessening one’s chance of survival.

If a gas heater of any type is used in an ice fishing shelter, you should provide adequate ventilation. If exhaust fumes from a heater of this nature are not given a way to escape, carbon monoxide poisoning can occur with little warning, ultimately leading to death.

It is also essential to dress accordingly when venturing out for an ice fishing excursion. Layering is recommended and highly advised, as this leads to more excellent body heat retention and prevents the sudden onset of a chill. Using a thermal base layer of clothing is also a wise choice.