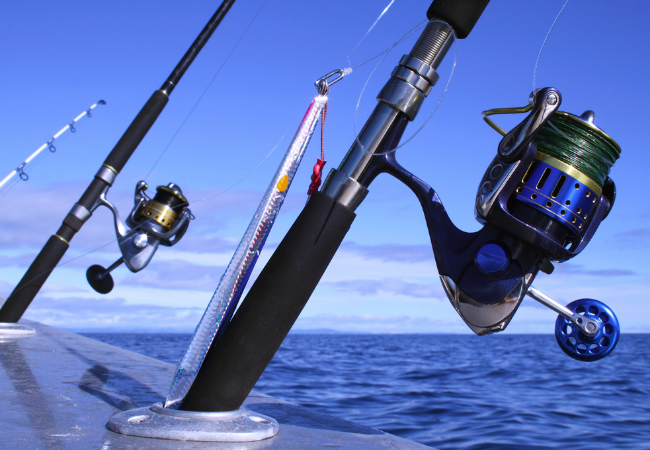 Best Overall: Penn Spinfisher VI 8500 (click to view)
“The Penn Spinfisher’s smooth operation, solid casting, near waterproof, and a ton of cranking power give it the edge. It can handle anything from snapper to sailfish in larger sizes.”

Best Premium Option: Shimano Spheros SW (click to view)
“The Spheros features an all-metal internal and is sealed against saltwater and sand. It offers a ton of power and can be spooled with an extra heavy braid. Great for fighting big offshore fish.”

Best Budget Option: KastKing Sharky III (click to view)
“The Sharky III has an innovative sealing technology to keep water out of your reel, it packs a smooth experience and a surprising amount of power into a low-cost package.”

Check Other Models on Amazon

Fishing offshore requires typically heavier and more powerful gear than inshore fishing. So whether you’re dropping for snapper and grouper or tossing lures for mahi mahi and king mackerel, you’ve got a serious fight on your hands. With the popularity of spinning reels at an all-time high, you need to know which ones are suitable for this type of fishing.

Line capacity for heavier lines, drag power, durability, and corrosion resistance are the most important things to look for in an offshore spinning reel.

We’ve put together this list, so when you take a spinning reel offshore, you know you’re in good hands and it’ll handle nearly anything you try to do with it. 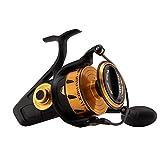 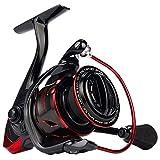 Here are the best spinning reels for offshore fishing you need to have:

Best Overall Offshore Spinning Reel: One of the best reels on the market, with a proven history, and able to handle everything you throw at it 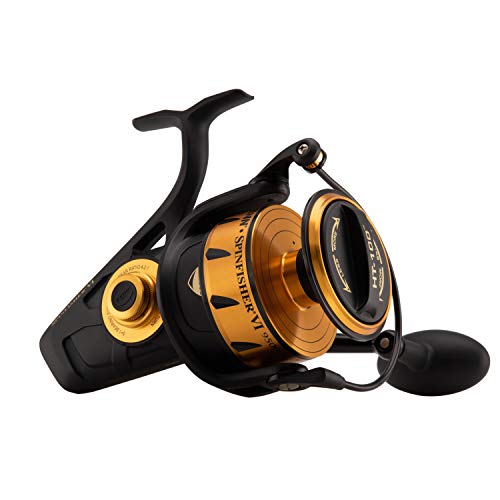 The Spinfisher gets recommended a lot here, and for a good reason, It’s simply one of the best reels you can spend money on. Smooth operation, solid casting, near waterproof, and a ton of cranking power give it the edge over its competitors. It also makes for an excellent offshore spinning reel to handle anything from snapper to sailfish in larger sizes.

With a line capacity of over 500 yards of 65-pound braid, 40 pounds of drag, and an added rear drag system for live-lining, the Spinfisher has plenty of power for large offshore species. In addition, every part of the reel is corrosion resistant with its full metal body, and both the internal gears and drag system are sealed against water. The 8500 size also boasts a massive 42” retrieval and weighs under 40 ounces.

Pure quality at a fair price makes the reel stand out. Of course, it isn’t the cheapest, but you shouldn’t ever need a replacement. With a bit of maintenance, mainly oiling it up once a year, it’ll perform just like it did out of the box for years. 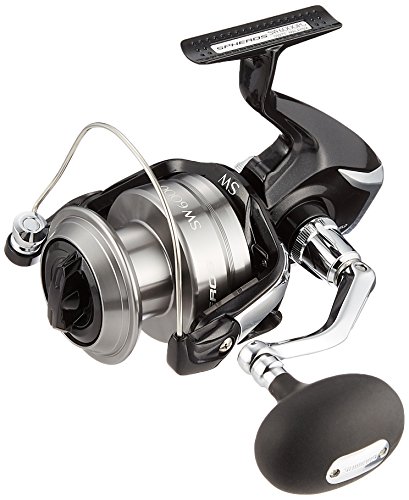 Another quality entry in the Shimano line is the Spheros, specifically designed with offshore angling in mind. The 20000 SW offers a ton of power and can be spooled with an extra heavy braid, making it an ideal candidate for fishing offshore game species.

The Spheros offers a ton of power in the form of 41 pounds of drag and the option to spool it with super-heavy braided lines. It’s patented Hagane body gives it more rigidity than other spinning reels, helping keep it from rocking on your rod. Its internals is all metal and sealed against saltwater and sand, making the more petite sizes great options for inshore fishing.

The sheer power and bulk of the reel make it a great candidate for fighting big offshore fish. It’s quite capable of stopping amberjack or cobia in its tracks and won’t have any problems hauling big reef fish up from the bottom either.

Best Budget Offshore Spinning Reel: A low-cost reel that won’t let you down. 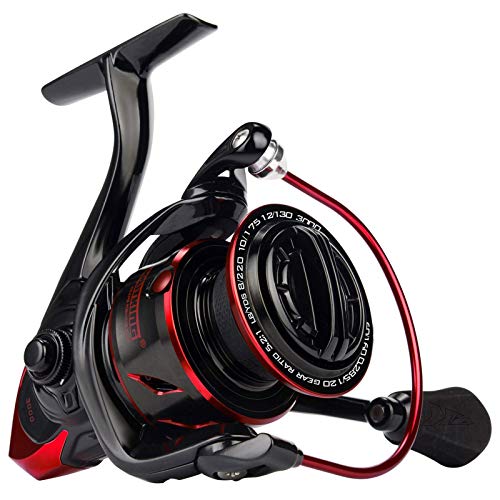 The Sharky III 5000 packs a smooth experience and a surprising amount of power into a low-cost package. It feels good to use, is plenty durable, and is sealed well against water and sand. It’s a great reel to round out your spread of rods on the boat and won’t let you down in a fight with a big pelagic fish.

The reel features nearly 40 pounds of drag, an excellent retrieval rate, extra bearings for smooth rotations, and innovative sealing technology to keep water out of your reel. The braid-ready spool means no need for backing when using slick braided lines, and the adjustable drag system lets you crank down on the power in a cinch.

The price makes the reel stand out. It’s a quality reel with many of the features and abilities of higher-priced ones on the list, and it punches well above its weight class. You can run a few of these reels and not have to worry about them being too cheap, a rare quality when it comes to fishing gear.

Best Offshore Spinning Reel With Highest Drag Pressure: A beast of a reel with over 60 pounds of drag that won’t ever corrode or wear down. 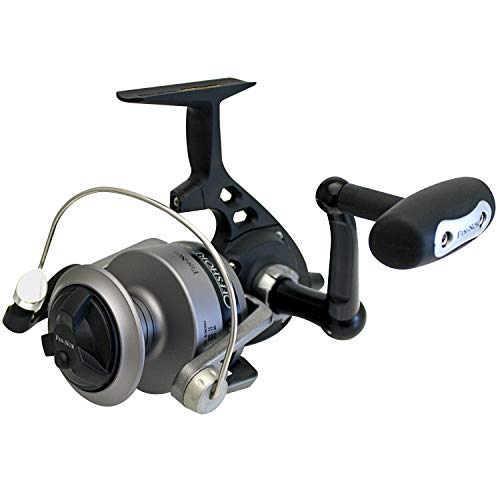 Fin-Nor put power into this reel. It’s got more drag power than most conventionals. If you’re going after big pelagics or bottom fish, you need to stop in their tracks; then this is the reel for you.

All gears inside the reel are made from stainless steel, which won’t wear out or rust. It has ten drag washers that let it output the ridiculous drag weight of 60 pounds. It also has a huge line capacity with room for 450 yards of 30-pound monofilament, a sealed drag system, and is even reasonably lightweight for a reel this size.

The drag power of the reel and its overall quality makes it stand out. 60 pounds of drag is double what you get with most large spinning reels and matches what you can get out of many conventional reels you’d use for big fish. Honestly, if you could somehow earn enough line on it, it could handle monster tuna. 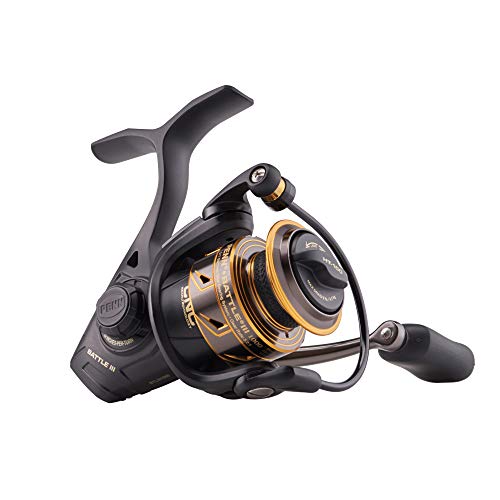 I’d be remiss not to include the PENN Battle III 6000 on this list. This newer version of the Battle is even better, with upgraded seals, drag washers, and fixed weak points of its predecessor. It’s an affordable and incredibly reliable option that can handle most mid-sized pelagic fish.

The 6000 series has 25 pounds of drag and can hold nearly 400 yards of 40-pound braid comfortably. With a retrieval rate of 41 inches per turn, it’s got the torque to bring fish up off the bottom and enough power to stop other fish from running.

The Battle series has served me well over the years, proving to be a reliable and affordable option whether it’s on the beach or the boat. For me, it has handled huge fish from bull reds to massive Atlantic stingrays, and to not include it on this list would be dishonest.

What To Look For When Buying The Best Offshore Spinning Reel

If you go offshore with a spinning reel for bass that has ten pounds of drag, well, you’re going to have a bad time. Without sufficient drag power, you’ll get spooled or let reef fish dive into holes and tangle you up. You don’t have to have a ton. Usually, twenty pounds is enough. However, the more power your reel has, the bigger fish you can handle. If you’re going to tackle big game fish, you need a powerful reel to do it, with a minimum of around thirty pounds of drag.

Fishing offshore means bigger fish, the fish can run more line off, or you’ll be dropping deep. You’re going to need a lot of line for this, but also that line needs to be bigger and stronger. That means the line is thicker and takes up more space. An extensive line capacity is essential on any reel you plan to take offshore.

Big fish put a lot of stress on your gear. Solid metal bodies and metal internals wear down much slower than alloys and plastics. If you’re going to fish offshore, you’re going to need a reel that can handle it.

Reels like the Penn Fierce had the same drag power as the Battle. The big difference was the Fierce had plastic gears moving the spool, and the teeth would strip, essentially making the reel useless. Remember that power is meaningless if the reel isn’t durable enough to handle it.

Can you use any spinning reel in saltwater?

Can you? Sure. Should you? Absolutely not. You definitely shouldn’t use a freshwater reel in saltwater, as they aren’t made to handle the salty environment and will rust up real quick.

For offshore fishing, you shouldn’t be using inshore reels either. The size and fight in the fish offshore are much different unless you’re catching baby snappers. They just aren’t made for it, and you’ll get spooled, strip your gear, or lose anything you hook into.

What is the best offshore spinning reel?

I haven’t owned a better reel than the Spinfisher series. You shouldn’t have any problems going with a Penn, Shimano, or Okuma reel as long as you avoid the bargain bin series of those brands.